An effective modality that can be used in conjunction with Nasal Release Technique. Studies dating back to 1932 have discovered that depletion of electrical energy from the body is the root cause of general unwellness.

In 1954, Schumann and Konig reported on their discovery of naturally occurring electromagnetic pulsations of the Earth calling it the Schumann Resonance. Schumann resonances are natural waves excited by igniting strikes in the cavity between the Earth’s surface and the ionosphere. These waves circumnavigate the globe an average of 7.83 times per second. This frequency correlates with the average frequency of alpha brain waves in human beings.

PEMF is a donating source of energy that helps the body repair, regenerate, and rebuild naturally. Research has shown that it enhances the function of the cells. It is FDA approved to facilitate bone healing and the treatment of depression.

In a concussion, the brain and the body takes in a force that leads to cellular damage resulting in a myriad of symptoms. This modality enhances the clearing mechanism of the body. I use the Pulse Centers Pro XL unit with pad placements on the head and body prior to Nasal Release Technique and following the procedure. The treatment is done in conjunction with eye exercises. 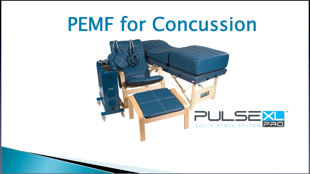 The Pulse XL Pro is before and after Nasal Release Technique Therapy. It increases the effectiveness of the therapy.